How do you structure a large business for relentless, continuous innovation? In the book we reference the work of Simon Wardley (who kindly let us use his graphic as well), and specifically his pioneers, settlers, town planners model (which in turn was drawn from Robert X. Cringely’s book Accidental Empires which describes companies in terms of Commandos, Infantry and Police). This is a framework I’ve described before, as a way of understanding the unique combination of characteristics and aptitude that are needed to bring products and services to life. Simon describes them as:

‘Pioneers are brilliant people. They are able to explore never before discovered concepts, the uncharted land. They show you wonder but they fail a lot. Half the time the thing doesn’t work properly. You wouldn’t trust what they build. They create ‘crazy’ ideas. Their type of innovation is what we call core research. They make future success possible.

Settlers are brilliant people. They can turn the half baked thing into something useful for a larger audience. They build trust. They build understanding. They make the possible future actually happen. They turn the prototype into a product, make it manufacturable, listen to customers and turn it profitable.

Town Planners are brilliant people. They are able to take something and industrialise it taking advantage of economies of scale. This requires immense skill. You trust what they build. They find ways to make things faster, better, smaller, more efficient, more economic and good enough. They build the services that pioneers build upon.

And here’s a great little video that Paul Houghton from the NHS Digital Team made about it: 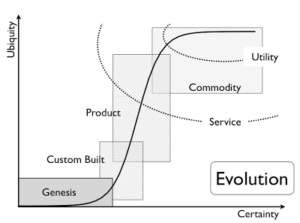 And we can map people into specific areas: 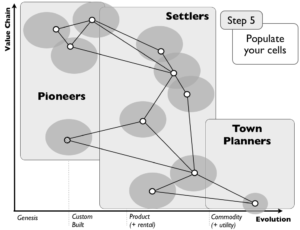 The model also maps to the Schumpeter definition of the process of technological change (or innovation) as consisting of three parts: invention (conceiving a new idea or process), innovation (commercialisation of ideas, or arranging the economic requirements for implementing an invention), and diffusion (scaling, adoption, industrialisation of the idea).
Focusing people with different aptitudes and skills to each of these task areas allows you to capitalise on what each of these brilliant types are best at (because, yes, you need brilliant people in all areas). 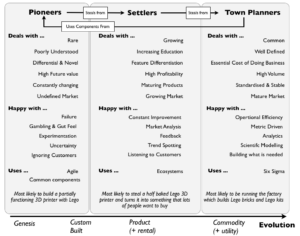 Where pioneers enjoy working in conditions characterised by high uncertainty and experimentation, settlers enjoy creating profitable models, showing improvement, adapting from customer feedback, and town planners are all about efficiences, incremental gain, volume and standardisation. Working methodologies and processes reflect the different needs at different stages (Agile and Lean dominant in the invention and commercialisation stages, process improvement systems like six sigma prevalent in the scaled, stable and known areas). 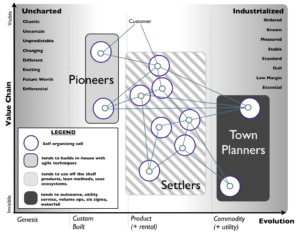 Harvard Business School professor John Kotter (in Accelerate, his follow up to one of the best books on change management, Leading Change) originated the idea of the dual operating system, a structural model designed to enable the rapid development of new ideas and models whilst still maximising the operational efficiencies needed to manage business as usual.

The idea behind this model is that when companies start out as startups, they are naturally small and highly networked organisations but as they scale they require management and greater efficiences and so the hierarchical side of the business grows over time. But as innovation slows and competitive pressure grows, the need for ever greater efficiency results in an entirely hierarchical business which has lost that networked capability. As organisations become larger they often become more internally focused, and innovation becomes additive to those in the hierarchy who are busy enough dealing with the day job. Kotter’s thought was about the need, in a rapidly changing business environment, to re-introduce some of the networked model to the organisation.
I’ve described before (in client work mostly) how this can be a useful way to manage business as usual whilst generating entirely new propositions, and to create a better balance between hierarchical, efficiency-driven management and pioneering, entrepreneurial, agile innovation – my own version of the networked side is small, multi-disciplinary teams focused on key business challenges that are defined by a new, compelling vision of the company that the business wants to be. And I’ve seen this work in large organisations that are undergoing significant amounts of change. The key is often in achieving the right balance between the two (sometimes the networked part of the business may start very small, but it may well grow – every organisation is different depending on their own contexts and so each needs to find its own balance). And in how you link the two together.
The risk I always acknowledge with a two-sided approach like this though, is the danger of allowing a gap to open up between networked side, and the hierarchy. Between what might be the pioneers and what is likely to be the town planners. Between the origination of early stage ideas, and the expectation placed on them to commercialise and scale early – in other words in moving a prototype that is not fully commercialised from the networked side into business as usual (where it is shackled in the hierarchy with targets, expectations, politics, too early in its lifecycle). As Eric Ries has said before now, most businesses don’t suffer from a lack of ideas, more the lack of an ability to commercialise and then scale a steady flow of new ideas.
But that’s exactly what most companies need. If business is moving from sustainable to more transient competitive advantage, it becomes critical to create a steady flow of new value derived from a seamless progression from the earliest product lifecycle stage, through commercialisation, to industrialisation and optimisation. What I like about the PST model is that it puts greater emphasis on that tricky middle stage.
Small, multidisciplinary teams are an effective way to resource the creation of new value in this way, particularly in the early stages where moving fast and retaining greater agility is most important. Sometimes there may be a degree of rigidity to the composition and role that specific project teams have, but more typically creating that steady flow means far greater fluidity in resourcing. As the video above shows, this may mean different types of people cycling through a project team in order to bring new capabilities and perspectives, evolving the shape of the team over the course of the product’s progression. And sometimes this will mean deriving value from outside the company (Simon makes the point that a not insignificant benefit of opening up your newly industrialised form via a public API  is that it enables pioneers from outside the business to create new value for you). Again, there is no one way, so each business needs to find its own path.
Yet the reality is, like many things in life, somewhat messier than the clean definitions and delineations that these models suggest. As Matt Edgar says in his critique of PST and Wardley mapping, using a term like ‘evolution’ is in some ways not that helpful:

‘It carries strong implication of an inevitable unidirectional process. Only with the benefit of hindsight can evolution be said to be a straight line, and that’s just a trick of perspective.’

In reality components become more or less important over time, groups form and re-form, and the classifications of components can change more rapidly and in non-linear ways. Instead of evolution, says Matt, maps are socially constructed, reflecting changing levels of consensus:

But accepting these imperfections, both models are useful and potentially complimentary. The dual operating system reflects well the need for a rebalance between hierarchical business-as-usual and more networked structures and ways of working in order to generate the space for the creation of new value. The PST model acknowledges better the need to resource properly and link together the three key stages of innovation. The key for me is greater fluidity and informality. Less rigid boundaries, less politics.
If I was running a large business today I would want that business to be structured in a way that created a steady stream of new value as easily as possible. I’d want a company that was well-managed enough to ensure exceptional efficiency and continuous optimisation of known components, but that also had the desire, discipline and space to experiment and find profit in new paradigms. And of-course I’d want one that had the imagination to think the unthinkable. Over time many companies have become overly-focused on efficiency and incremental gain. It’s time for a rebalance.
For more like this, order your copy of Building the Agile Business Through Digital Transformation, or you can join our community to access exclusive content related to the book