One of the challenges inherent in digital disruption (that we discuss in the book alongside talking about overlapping technology lifecycles) is that by the time it becomes widely evident that your business is being disrupted it is often already too late to do anything meaningful about it.
In writing about the story of the mobile hardware market last year Ben Evans used an analogy for this which is a real favourite – the ‘Wile E Coyote effect’. He talks about the problem of lagging indicators and how headline metrics tend to be the last ones to start slowing down. This can ultimately mean that at the point when it is most critical for an incumbent to innovate, everything can still look great for that business and the leadership sees no reason to change trajectory. This is however, precisely the time when a new technology or model enters the market and starts to rapidly erode the dominance of the existing model. Hence the Wile E Coyote effect:

“you’ve run off the cliff, but you’re not falling, and everything seems fine. But by the time you start falling, it’s too late”. 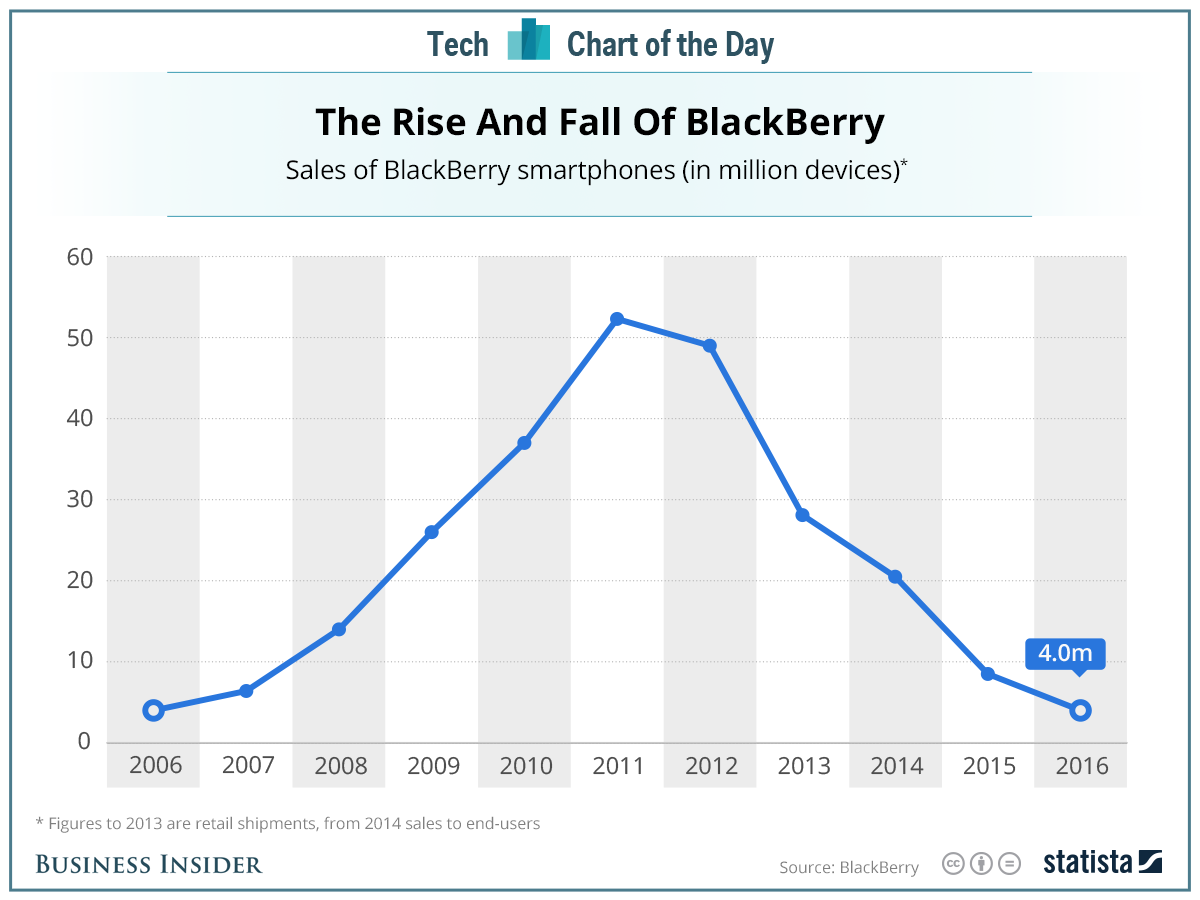 Ben points at Michael Mace’s analysis of Blackberry, written just at the point of their collapse. Mace noted at the time that Blackberry’s market was saturating, they had seemingly lost the ability to create great products, and were drifting into a situation where they could not afford the investments needed to succeed in the future (a line that is easily crossed and very difficult to rectify). The history of failed computer platforms, he says, tells us that the early symptoms of decline are typically very subtle and easily rationalised away by executives. Like Wile E Coyote, by the time the symptoms become obvious, you’re hanging in mid-air with nothing beneath you:

“Nokia and Blackberry were skating to where the puck was going to be, and felt nice and fast and in control, while Apple and Google were melting the ice rink and switching the game to water-skiing.”

Mace believes that the key symptoms to watch are small declines in two key metrics: the rate of growth of sales, and gross profit per unit sold (gross margins). As products move through the traditional diffusion curve from early adopters, through early and late majority to late adopters, pricing incentives help boost sales and growth. As the technology matures and the middle portion of this curve gets consumed introducing another price incentive may still boost sales, and lead to the belief that the product is truly ‘hitting the mainstream’. Yet without realising it (and bearing in mind that the market for any given product is finite), rather than reaching the mainstream market you are instead consuming the late adopters:

“Companies tend to assume that because the adoption curve is drawn as a smooth-sided bell, your demand will tail off at the end as gradually as it built up in the beginning. But that isn’t how it works.”

It may take a good deal of time and effort in the early stages to build up momentum, but as the technology or product matures and you begin to saturate your market the momentum you have built up through well optimised brand, marketing and distribution means that you ‘gulp’ through the late adopters rapidly and sales continue to grow until they suddenly drop. The Wile E Coyote effect.
The key challenge then, is to be adept at recognising those early signals and to be prepared to re-orient the organisation towards experimentation rather than simply efficiency.
For exclusive content related to the upcoming book on Building the Agile Business, you can sign up here.
Image source 1, source 2